The government of Quebec is planning to welcome 51000 new immigrants to their province by 2017, according to the Immigration Minister Kathleen Weil. She affirmed for the current week that they will  provide extra funds to French Language –training programs to the newcomers, which may cost $31 million. Likewise, the total cost to the complete area is calculated as $168 million a year to the Government.
Weil also mentioned that they may increase this number to 52,500 every year by 2019 despite of opposition from different parties to continue it at 50000… which would be best for the province. Quebec has a unique immigration agreement with the Federal Government and has its own choice for economic immigrants. 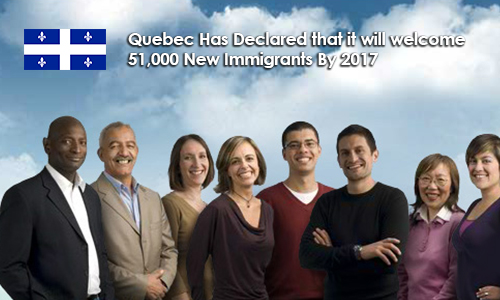 The government of Quebec has increased the new arrival percentage to 63% against the current 59%. The new arrivals who are qualified workers and businessmen, come through various programs like Quebec Skilled Worker Program (QSWP), Quebec Experience Class and the Quebec Investor Program.

Weil also declared that after 3 rounds of discussion with the opposition, she had an arrangement to confirm, that they are prepared to receive the new immigrants with pre-learned French Language. and further openings for work. They will also have a new Job Bank for this province which will be valuable for the immigrants to coordinate their skills and get work even before they arrive, this is predicted to be open and up by this New Year.
Quebec government also allows immigration through the Federal Government's Family Reunification programs, which is likely to happen that 11,500 individuals should be rejoined with their families in this province by next year.