In terms of land area, Australia is approximated to be about 7,692,024 sq.km and is the 6th largest nation in the world. However, population wise, the country has a relatively smaller population. Australia is a nation of many contrasts. For instance, mainland Australia is not only the largest island but it also is the smallest and flattest continent on the planet. The interesting thing about the nation, however, is that about one out of every four Australian was born in another country, or either one or both of their parents was born overseas. Only 2% of the population is made up by indigenous citizens and these are the Torres Strait Islanders and the Aboriginals.

The seasons in the temperate zone are described in terms of European seasons applied to the southern hemisphere in the following sequence:

In the southern capital cities: Sydney, Canberra, Melbourne, Hobart, Adelaide and Perth, defined by the temperate zone, the average temperatures are: Summer minimum 16 and Summer maximum 26 and Winter minimum 6 and Winter maximum 14, all in degrees Celsius.

English is largely monolingual being the de facto national language.

Universities and Colleges in Australia

The AQF has 10 levels and links school, vocational and university education qualifications into one national system. This allows you to move easily from one level of study to the next, and from one institution to another, as long as you satisfy student visa requirements. It allows for choice and flexibility in career planning. All qualifications in the AQF help prepare you for both further study and your working life.

The institutions are linked across the country and across the world, which makes it easy to move throughout the education system between courses or institutions and formal agreement and recognition frameworks mean every step of the path will contribute to your future no matter what your study or career goals. 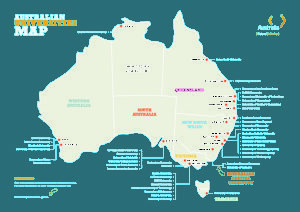 Australia, a vibrant free-market democracy, has recorded impressive economic progress unmarred by recession for more than 25 years. In addition to abundant natural resources, the economy has benefited from an effective system of government, a well-functioning legal system, and an independent bureaucracy, all of which have facilitated robust entrepreneurial development.

Australia is one of the wealthiest Asia–Pacific nations and has enjoyed more than two decades of economic expansion. It emerged from the 2009 global recession relatively unscathed,

The economy of Australia is one of the largest mixed market economies in the world, with a GDP of AUD$1.62 trillion as of 2015. Australia is the 19th-largest importer and 19th-largest exporter.
The Australian economy is dominated by its service sector, comprising 68% of GDP. The mining sector represents 7% of GDP; including services to mining, the total value of the mining industry in 2009-10 was 8.4% of GDP. Economic growth is largely dependent on the mining sector and agricultural sector (12% of GDP) with the products to be exported mainly to the East Asian market.

States and territories of Australia

Canberra, in the Australian Capital Territory, is Australia's capital city.

Map of Australia by States